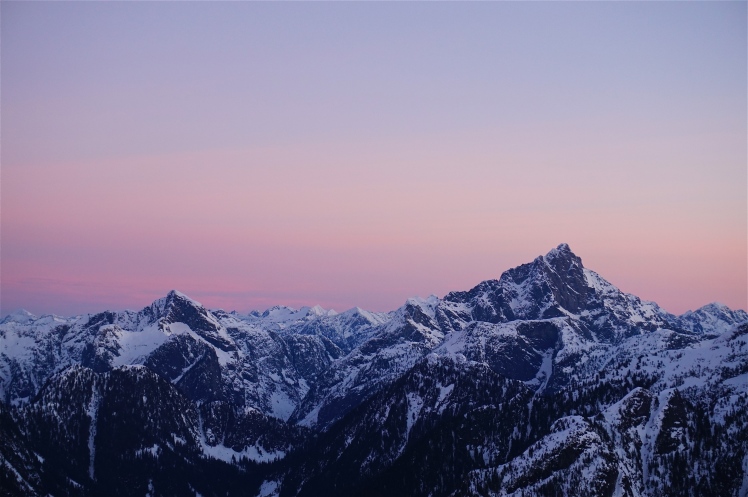 I ran into Dan in the mountains in the summer and we started talking a few months back on ClubTread. After doing a few trips together this winter, we set out to tackle the mighty Mount Martyn in Golden Ears Park with Dan’s buddy Mike.

Bad conditions on Mt Martyn had previously turned back Dan two winters ago when he tried it solo. It was not on my radar at all, but after reading a few trip reports, it seemed like a great way to spend two days.

We rolled into the East Canyon parking lot right behind the Ranger at 8AM on January 9, and soon after our long trudge down Gold Creek began. I have only previously been to km~4 with Dan and Mike the month before, when we climbed Nutt, but they had both been to Hector Ferguson and Raven peaks and knew the trail well.

After 6km, the trail deteriorates to frequent deadfalls, and areas of route finding. Fortunately, Dan and Mike knew where to go and a couple of snowshoers had gone before us. Despite the state of the trail the upper sections of Gold Creek are a good destination on their own – mature forest, pristine clear waters, and views of Edge Peak occasionally. A few tricky creek crossings, which we negotiated better on the return, and some cursing at deadfalls brought us to the 11km beach. After leaving the trail at the beach, we plunged head first into the bush. We were on the north side of a gully draining a high col south of Martyn’s final ridge. Travel here was surprising pleasant with the snow cover, and the snowshoes went on soon. The forest here was glorious, with continuous old growth from the valley floor to the subalpine. We were lagging a bit through the bush and at times deep snow, and reached the col around 300 and had a short break. We decided then to push on and camp on the summit – despite the fact that we might not make it for sunset. I raced ahead, but couldn’t keep my pace and didn’t break tree-line for sunset. We reached the summit around 5PM but didn’t venture to far in fear of cornices. About 5m below the summit, we dug out some pits and set up for another long winter night. (Picture from the following day) The new moon brought us many stars despite being so close to the city and dozens of shooting stars.

The night was a bit frosty – at 4 AM Mike and I woke to a full white-out and I feared the worst, but come sunrise, the clouds had lifted and would continue to do so for the rest of the day. The morning was a bit chilly, but not as bad as I was expecting. Sunrise was indeed memorable. For such a low elevation peak, the views were outstanding: The Judge and Robie Reid and Golden Ears front-and-centre, with the Coquitlam-Pitt divide and northern Garibaldi and Golden Ears peaks visible in the distance. I couldn’t decide which picture of Judge Howay was best so here are two more: The entire Coquitlam-Pitt Divide stretched out before us: Mike making a run for the summit. Mike on the summit. Getting a different perspective (photo courtesy of Dan or Mike, not sure). We hung out on the summit for a long while and daylight revealed more textures in the surrounding mountains. The divide again, in full sun.

Around 1030, we reluctantly began our descent to Gold Creek. Attempting to short cut a section of bush around km 10.5 of the East Canyon trail, we cross the drainage gully to the south where we encountered severe windfall and the worst bush of the trip. After some cursing and bleeding, we were back on the trail and heading for the parking lot (turns out the road was closed that day and we had to wait to be let out by the ranger).

Overall, a great weekend exploring in southern Golden Ears Park and a nice winter objective close to the city.

Dawn patrol isn’t so bad on the shortest day of the year. Went for a pre-work ski tour to celebrate the solstice.
Beauty little September scramble ramble north of Pemberton. Great weather and great views. Love getting back into the mountains after kayak season, we always get super lucky with a perfect weekend to kick off the fall and this year was no different!
🥰
Married my love two months ago tomorrow. It was magic ✨
Double vacc’ed and relaxed (and incredibly grateful).
Beach camp a few weekends ago. Thought we could sneak around the headland to our beach spot without getting wet, didn’t anticipate a big incoming set. 🌊🌊🌊 Got soaked and had a good time.
North Island tidal pool exploration, colours of the coast.
B-day views of the Gulf Islands
Loading Comments...
%d bloggers like this: